Prof. Silvia de Sanjosé, president of IPVS and Prof. Dace Matule, president of the Latvian Association of Gynaecologists and Obstetricians, presented an award to Prof. Borruto a leader in cervical cancer prevention. The occasion was the obstetrics and gynecology meeting “Latvia meets Monaco” which took place last April in Monaco. 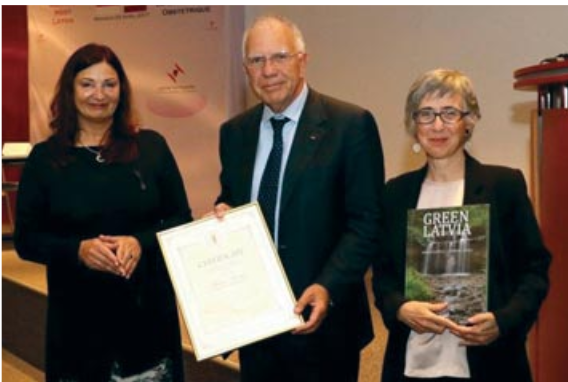 Prof. Franco Borruto gave a lecture on cervical cancer screening and high-risk HPV testing. He explained the importance of work in this vital area of women’s health: ‘Latvia – with about one million women over the age of 15 – has a very high incidence rate of cervical cancer: 23 cases per 100,000, about six times higher than in neighbouring countries such as Finland. It is estimated that two women per week die from cervical cancer in Latvia.’

Prof. Silvia de Sanjosé explained: ‘Monaco has a population of about 14,000 women over 15 years of age, and access to early detection is a common practice. The Monaco authorities have deployed and supervised all WHO recommendations for vaccination and screening. Wherever we are in the world, vaccination is a key issue for HPV prevention. About 500,000 cases of cervical cancer have already been prevented worldwide in the last 10 years by vaccination. Unfortunately, we still anticipate 36 million cases of cervical cancer over the course of life among women who live around the world.’

‘Experiences in different countries have shown that the only programs that succeed are in school – for girls before 15 years of age, two doses are sufficient. Immunization reaches 80 per cent in most countries.’

‘Programs need strong support from the authorities. Only a strong official response, well documented and scientifically valid, can stop this conflict (examples are the UK and Spain). With HPV prevention, we have an important job to do. Women can be protected against HPV and we now have the means to do so in a safe and effective manner. We need to communicate this good news to health professionals and the public, but especially to public health officials.’

‘We have a problem, but now we have the solution!’