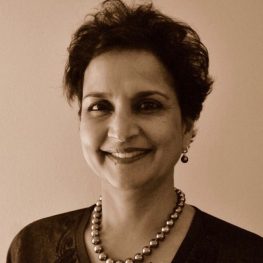 Shobha S. Krishnan, MD, FAAFP is the founder and president of GIAHC. She is a board-certified family physician and a gynecologist. She has been involved in the areas of primary care and women’s health for over 30 years. She has extensive experience both nationally and internationally in the field of HPV and HPV related diseases.

Dr. Krishnan serves on the Board of Directors at the American Medical Women’s Association (AMWA). She is the chair of the Us vs. HPV Prevention Week in the US and member of the Advocacy and Campaign committee at the International Papillomavirus Society (IPVS). She is also the vice-chair for the HPV and Cervical Cancer Elimination Committee of the Medical Women’s International Association (MWIA) and sits on the Medical Advisory Board of the National Cervical Cancer Coalition (NCCC). In addition, she represents GIAHC as one of the founding members of the Cervical Cancer Action for Elimination (CCAE) network among many others. She has served as a member of the STD research-working group at the Columbia College of Physicians and Surgeons and as surveillance physician for the Centers for Disease Control and Prevention.

She is the author of the award-winning book, The HPV Vaccine Controversy: Sex, Cancer, God and Politics (Praeger 2008). The book is the recipient of the 2009 Book of the Year Award from the American Journal of Nursing and is the winner of two 2010 International Book Awards. Details of the book and other pertinent information can be found at thehpvbook.com. She has also contributed a chapter in the award-winning book, Cancer Screening in the Developing World (Dartmouth University Press, May 2018) which outlines GIAHC’s experiences with cervical cancer screening and early treatment rural India.

She is the recipient of the 2019 Esther Pohl Lovejoy award presented by The American Medical Women’s Association (AMWA) for her interest and dedication to the promotion of international relations through improvement in global health.

Krishnan completed her OB/GYN residency in India and a second residency training in Family Medicine at St. Vincent Hospital and Healthcare Center, Indianapolis. She then went into private practice for 10 years in the Indianapolis area before joining Columbia University in New York in 1999- 2011. In December 2015, she received her graduate certification in Non-Profit Leadership and Management from the University of Florida.